A climate crisis is upon us. The historical drought, fires, and temperature shattering records of 2012 are not due to a natural weather cycle.  This year follows the worst drought and fires in Texas during 2011 that caused a 5 billion dollar loss in agricultural and property damage in an single state.  NOAA scientists, who have some of the top climate scientists in the world, determined that there was just one chance in 20 that the Texas drought was natural. They concluded it was the result of human induced climate change.  For more than 20 years, every scientific assessment has concluded that our world will have more severe weather events just like we are having now unless we reduced our greenhouse gas emissions from use of fossil fuels. But we continue to use more fossil fuels every year.

Driving across the western U.S. you see vast tracks of corn, stunted, and brown.  The ears of corn are almost non-existent in many locations.  The absence of corn is not simply due to lack of water, but because corn cannot pollinate well when temperatures soar above 100 degrees.  Then there are the fires, which may be the worst in U.S. history.  In Colorado Springs, 450 homes were destroyed as flames swept down at 60 miles per hour having consumed dried out forests.  As you walk through the neighborhood, you can feel the homeowners’ sadness, looking upon the small memorials made of personal items that survived the fire.  The burned out remains of a coal powered air conditioner is a reminder that our choice of electrical energy is damaging our lives and those of future generations.  Yet on the Midwestern plains, groups of wind generators majestically turn against the blue sky. 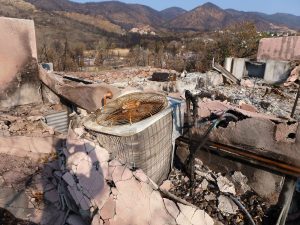 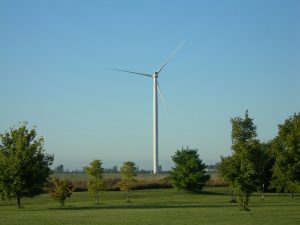 We have a choice.  Business as usual, where our world energy will be dominated by damaging fossil fuels or one powered clean renewable wind and solar.  Romney’s energy plan is for coal, against renewable energy, and will curtail EPA’s authority to control damaging greenhouse gas omissions.  Large wind companies such as Vestas are laying off workers because the Republican controlled Congress has not renewed a tax break for wind generation.  Coal and oil companies have received massive tax breaks for decades.  Obama, who said on September 6th that “climate change is not a hoax”, strongly supports renewable energy and transition fuels such as natural gas.  The election is about many choices and directions, but it is also about the energy path we shall take and the world our children will live in.